Last weekend I visited the Discover Dogs show at Earls Court, London. Amongst the many highlights were the Southern Golden Retriever Display Team’s formation dancing routines and flyball competitions. 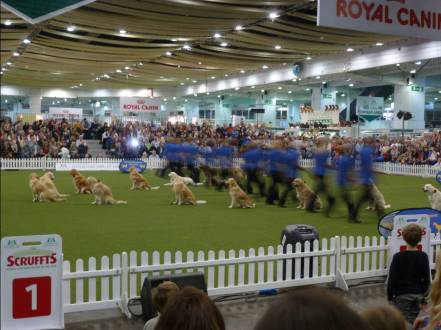 From Bedlington Terriers to Borzois, the show provided the opportunity to meet different dogs at the breed stands (my favourites, in case you were wondering, were; Border Collies, Irish Wolfhounds, German Longhaired Pointers and Flat Coated Retrievers).

Saying hello to a Bedlington Terrier

Organized by the Kennel Club, the show also played host to Scruffts, a competition to find the ‘Family Crossbreed Dog of the Year.’ Unlike Crufts, where dogs are judged on their appearance and conformity to breed standards, Scruffts celebrates ‘the special relationship with man’s [sic] best friend and brings together crossbreed dogs and their owners.’ In many ways, Scruffts and Discover Dogs are responses to criticisms levelled at the Kennel Club that dog shows and breed standards result in unhealthy dogs. To counter such claims, Discover Dogs places a strong emphasis on living and working well with dogs so that both humans and canines are healthy and happier. In this vein, it offers seminars on ‘Reiki for dogs,’ ‘Obesity – tackling the “big” problem,’ and the ‘Psychological benefits of owning a dog.’

Discover Dogs illustrates how dog shows and ideas about dog breeds shift in relationship to wider social and cultural changes. The first official dog show in Britain took place in Newcastle on 28 June 1859 with only sixty competitors in each class (pointers and setters). The number of shows then increased rapidly; 380 took place in 1899. The shows were hugely popular and provided an outlet for dog breeders to display their animals. The organizers of dog shows, such as the Kennel Club, sought to create a serious atmosphere to replace the informal and bawdy dog shows held in pubs, thereby making dog-fancying a respectable pursuit. Dog shows became stomping grounds for gentlemen and gentlewomen, as well as reputable workers. Across the Channel, the Société impériale zoologique d’acclimatation held the first French dog show in 1863 in theBois de Boulogne. Organized by scientists and members of high society, the show and subsequent ones had a refined and elite atmosphere. Many contestants had aristocratic backgrounds and lived in fashionable Parisian neighbourhoods.

Dog breeding and displaying are attempts to classify and fix dogs into particular shapes and sizes. But the ways in which dogs are displayed and represented is far from fixed. The organizers of mid-nineteenth century dog shows would surely have been surprised by the family-orientated and democratic atmosphere of Discover Dogs.

To find out more on nineteenth-century dog shows, see Harriet Ritvo, The Animal Estate (1987) and Kathleen Kete, The Beast in the Boudoir (1994).